Prepositions of place (under, over ...)

Try the lesson on the basic prepositions of place (in, on and at) before you start this lesson.

The cat is under the table.

The cat is on the table.

The cat is in the basket.

The cat is next to the table.

The light is above the table.

The picture is over the table.

The spider is in front of the TV.

The spider is behind the TV.

The spider is opposite the cat.

Be careful with above and over. They can be used in the same situations but not always. Over can be used when the two things are touching or one is covering the other - don't use above in this situation.

Put your hand over your mouth when you yawn.

Over and above can also be prepositions of movement:

I climbed over the wall. (up, then down)

The plane flew above the clouds. (to a higher position)

Also, be careful of the difference between in front of and opposite. Usually opposite is used when two things are facing each other, especially when there is something between them.

I parked in front of his house. (on the same side)

I parked opposite his house. (on the other side of the road)

Look at the picture below, then complete the sentences using the correct preposition of place. 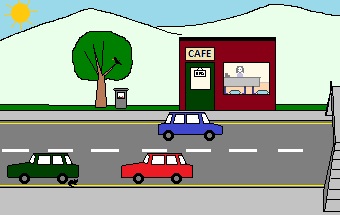 I'm also on Facebook. When I put new activities on this site, you can find out through Facebook updates.